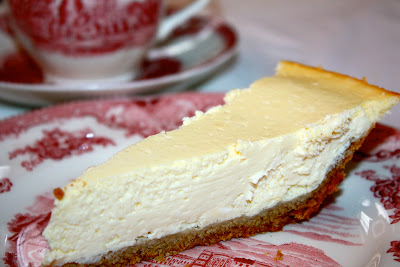 My husband is one of those really lucky people who happened to have been born on New Year's Eve (please note the sarcasm in my tone), so every year since we've been married, we get to celebrate his birthday on this joyous day (which means we get to do what he wants to do!). But I am also so lucky that my husband is so caring and wants to throw a party instead of just making it all about him (as we should all be able to do on our birthday, right? No argument there!)

So this year, we celebrated with a feast cooked entirely by my husband. It is the one day that I relinquish complete control of my kitchen (this is a very hard thing for my Type A, control-freak-natured person to do). And it was fabulous! And it was a feast!

The one request that he had of me was to make him his favorite dessert: cheesecake. Now, I've never been a big fan of the stuff; I'd opt for a chocolate dessert-thingie any day over a cheesecake. However, I have come to love it in recent years, probably because I make it from scratch and put only the healthiest of ingredients in it.

This recipe just so happens to hit the delicious cheesecake mark so high, we end up eating whatever is left over for breakfast over the next few days. And it's totally ok to eat for breakfast as there is no sugar (and thus no spike in insulin levels); it is replaced by a small amount of Xylosweet (the particular brand of Xylitol I use), which is a natural sugar replacement derived from the sap of birch trees and other plant sources and is very low on the glycemic index (making it great for anyone with diabetes or glucose issues, or just for people who want to nix the sugar addiction, which should be all of us).

The secret to it's light and refreshing yumminess is in the lemon zest and juice. Not much (so lemon flavor doesn't overpower the taste), but just enough (to give it that, "Hmm.... what is that bit of surprising tang I taste...?").

A real winner, for cheesecake lovers and even those who are not, so try it for your next party and you'll have raving reviews!

To make the crust, combine sorghum, almond, and tapioca flours in a bowl. Add baking soda and stir. Next add the oil, water, and agave and stir until a dough ball forms (use a pinch more water if it is too dry, but be care not to add to much water).

Press the dough ball down with the palm of your hand in the pie plate, and continue pressing out the dough until it is evenly distributed on the bottom and sides of the pie plate.

Bake crust for 12-15 minutes, until golden brown. Remove from oven and reduce oven temp to 325 degrees.

Meanwhile, to make the filling, soften the cream cheese (pop it into the microwave for 30 seconds to a minute if need be). Beat cream cheese with a hand mixer until combined. Add the eggs and continue mixing until almost smooth. Add the vanilla and salt and give it one final mix.

Pour the filling into the pre-baked pie crust. Place pie plate on a cookie sheet and bake pie for 45 minutes, or until the edges of the cheesecake start to brown slightly.

Remove from oven, let cool for one hour on the counter, then refrigerate for a few hours until ready to serve.

Serve with freshly whipped cream and blueberries or cherries.

This is part of Slighty Indulgent Tuesdays...
at 12:44 PM