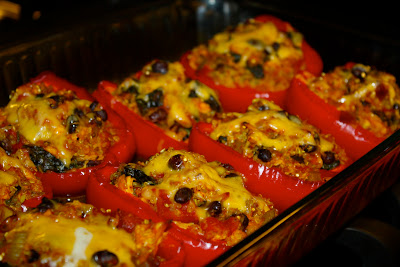 I don't know what gave me the hankering for stuffed peppers, but I got one yesterday. I have never actually made stuffed peppers myself, but have a friend who makes them all the time and raves. So when I went to the grocery store, I stocked up on bell peppers to make this dish. Not usually my go-to produce of choice, simply because the organic peppers at my coop are a tad on the expensive side (this time of year anyway), due to the fact that they have to travel all the way from Mexico. So for this dish, in the interest of keeping it a bit more on the economical side, I bought conventional bell peppers: 6 for $5.99, about a buck a piece. Not bad. (Of course, if you make this in the summer with bell peppers from your garden, it would cost you probably only a buck or two for all six. Note to self: make this with all those sweet patio peppers this summer!)

And since we don't eat a ton of rice here at home, I wanted to change up a traditional stuffed pepper recipe and use quinoa instead. Adding a few unexpected spices to it also gives it a whole new spark. Talk about bold and pungent flavors: cumin, curry, and chipotle chile! It's the kind of dish that makes your whole house smell divine (or as my four year old put it, "Mommy, the house smells spectacular!" He's really into big words these days.)

I've said it before, and will say it again: because this dish is cheesy, it's so appealing to kids. Mine scarfed it down, faster than me, and that's saying something because come dinner time, I was hungry!

The credit for this recipe goes to Vegetarian Times. My favorite magazine and online recipe source, the fab crew over there has done it again (I make Vegetarian Times recipes almost weekly with astounding success). Not entirely the same recipe, but definitely the same concept. My version, of course, is not vegetarian, thanks to the chicken, but it would still taste wonderful without it if you want to nix the chicken on account of your vegetarian needs. Or if you like the extra kick of protein that you get from the meat (not that this dish needs extra protein; the quinoa and black beans alone provide tons of it), you could substitute taco meat in place of the shredded chicken. (We have leftover taco meat from grass fed beef all the time because tacos are, without a doubt, my husband's favorite meal. His nickname growing up was the "Taco King." You get the drift.)

Any way you dice it, this stuffed pepper dish was a winner at our house and is sure to make it back on a recurring basis.

In a large saucepan, heat coconut oil. Chop onion and celery and mince garlic. Add to pan and cook 3-4 minutes, stirring occasionally. Add spices and cook another minute. Next add tomatoes and spinach, put the lid on the pot for about 3 minutes, until the spinach is bright green and wilted. Then add beans, chicken, stock, and quinoa. Stir to fully incorporate. Add 1 cup of cheese, salt and pepper to taste, and stir again until the cheese melts. Bring to a gentle boil, turn heat down to a simmer, and place lid on pan, cooking for about 10-15 minutes, until the quinoa is mostly cooked (it's ok if it's not fully cooked as it will finish cooking in the oven).

Meanwhile, slice bell peppers in half lengthwise and clean out ribs and seeds. (You can leave stems on or off depending on preference. I removed the stems.) Fill peppers all the way to the top with quinoa mixture and place side by side in a large baking dish (you may need either two 8x8 dishes or a 9x13 and another small dish). Pour 1/4 cup water in each dish, enough to just coat the bottom of the dish.

Place foil on baking dishes and bake in preheated oven for one hour. Remove foil, top each stuffed bell pepper half with remaining cheese, and bake uncovered an additional 15-20 minutes, until cheese is bubbly. Remove from oven and let rest 5 minutes before serving.

This recipe is a part of Slightly Indulgent Tuesdays over at Simply Sugar & Gluten Free...
at 3:34 PM