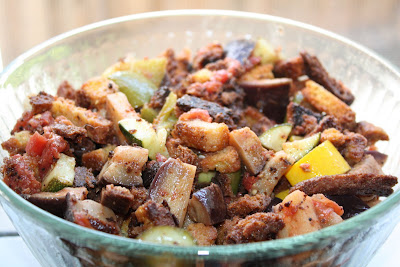 It's been a frustrating year of growing vegetables in my backyard. First, the weather has been quite A typical of a normal Minnesota summer. Lots of storms, lots of heat, lots of humidity, and all very early on in the season. Then there were the rabbits. And then there were (and still are) the Japanese Beetles. Oh boy. With that combination of farming nightmares (at least farming in my own little urban garden), I have only three out of my nine crops planted left: eggplant, peppers, and a very small portion of kale. All of my other plants had to be uprooted last week. It was very sad, especially when you think of the time, money, and patience put into the growing process. Thankfully, this is the first year we decided to sign up for a CSA (Community Supported Agriculture), so despite my lack of backyard produce, we have not been short of fresh and local veggies.

That being said, my eggplant not only survived the harshness of the season, it has flourished. And now I have a ton of it. That, combined with the zucchini and summer squash from my CSA, has pretty much filled up my crisper drawer. Time to put those fresh veggies to good use.

I've never been a "bread" salad kind of girl, especially after giving up gluten. However, I was watching an episode of Kelsey Nixon's Kelsey's Essentials recently during my workout, and she had an inspiring recipe for a fresh panzanella salad that looked divine. And as luck would have it, I just so happened to have a bag of gluten free bread chunks in my freezer just waiting to be used up. So I came up with a version of the panzanella salad, gluten free style. And now that I know how easy and delicious it is to make this (and gluten free no less), it will be a staple in my house this time of year when those veggies come knocking on my crisper door.

Chop eggplant, zucchini, squash, and pepper into large bite size chunks and place in a large bowl. Drain juice from can of tomatoes, or if using fresh tomatoes, chop into large chunks and add to bowl. Drizzle veggies with oil and salt and pepper to taste (about 1/2 to 1 teaspoon each). Stir to combine. Spread in a single layer onto one of the prepared baking sheets. Bake 20 minutes in preheated oven.

Meanwhile, spread bread chunks evenly onto the other prepared baking sheet. Grate garlic cloves over bread and drizzle with oil. Bake for 6-8 minutes, during last part of baking time for the veggies.

Remove both pans from oven. Place bread chunks in a large bowl to stop from browning further. Let veggies cool on pan for 30 minutes to 1 hour. Then add to bowl with bread chunks.

For the dressing, add vinegar, mustard, and a pinch of both salt and pepper to a small mixing bowl. Whisk in oil in a steady stream until emulsified. Pour dressing over bread salad. Stir to combine.

This salad can be served immediately, but flavors deepen if allowed to rest at room temperature for 30 minutes to 1 hour.