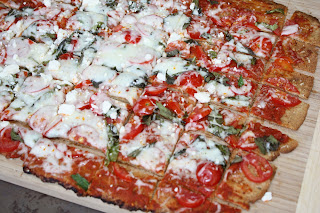 **Update: this post was published before my lab tests confirmed my gluten sensitivity, so if you are strictly gluten free like me, stay tuned for my gluten free crust recipe.**

This post is so timely, just perfect for your Friday night. In our home, Friday nights are legendary "pizza and movie nights". It all started when my husband and I received a pizza stone as a wedding gift over seven years ago. We pulled it out of the box and thought, Hmmm, what an odd wedding gift. But decided to give our best shot out of making our own pizza. Our first few pizzas were a disaster (my husband insisted that we use one entire pound of cheese per pizza!) We kept trying though, every week, thinking that maybe this week the pizza would come out just right. Well, I'm glad we kept at it, because in just a few short months, we had perfected the art of making pizza at home.

Of course, we have come a long way from our early days of making pizza at home. Back when we were first married, we were pinching pennies every chance we could get to pay off some debt, so we ate as cheaply as we could, which means that we didn't eat very healthy (in fact, I didn't really even know anything about health back then). We would buy Betty Crocker crust mixes for $0.33, add some water, and start rolling the dough. (Little did I  know of what the ingredients were in those Betty Crocker crusts.) I wouldn't even think about doing that now! Now I make everything from scratch. Partly because I just like to be in the kitchen, partly because it does save money, but mostly because of the health benefits (I get to control what I put into my crust).

This crust recipe does contain gluten, but the grains used are sprouted, making it more digestible. I make it for my husband and son (my baby is not onto solids yet), but I make a separate, gluten free crust for myself as I have learned that my body doesn't tolerate gluten. (Stay tuned to a later post for my gluten free crust version.) Of course, you can always skip the "sprouting of the grains" step, but it really is not hard once you get the hang of it. Or, if you think it is just too much work to make your own crust, any good quality, pre-made crust from your local grocery or health food store will do.

I also recommend using the freshest toppings available. The toppings in this recipe (except for the mozzarella) all come from my garden. It makes such a difference in taste!

Another note: this pizza is slightly different than our normal Friday night pizzas in that it is grilled instead of baked in the oven (remember, I can't use my oven right now because these summer temps are too hot for my old house with no central air). Therefore it does not call for using a pizza stone, but rather a cookie sheet. Since the cookie sheet goes right onto the grill, I recommend using one that you don't mind turning a little charred (but hey, I think this gives it character!).

Mix yeast and water in a small bowl and let rest for five minutes. Meanwhile, mix flours, salt, and oil in medium size bowl. Add water/yeast and stir to combine. Knead dough for a few minutes to get all ingredients incorporated and into a nice ball. Place dough ball in an oiled bowl. Cover with a cloth towel and let rest 45 minutes.

After resting time, take dough and divide in half, as the recipe makes two thin crust pizzas. If not using both right away, freeze one crust in a ziplock bag in the freezer for up to four months.

Preheat grill. Take the dough you are using and roll out on a floured surface to the desired size (I make mine in a rectangle shape just slightly smaller than a large cookie sheet). Carefully transfer dough to an oiled cookie sheet. Poke holes on the crust using a fork to let air escape. Leave the crust on the cookie sheet and grill for 5-7 minutes, until the crust turns golden brown.

Pull the crust off the grill and cover with pizza sauce. Add tomatoes in single layer, then basil, then cheese. Drizzle oil over the top and place on grill for an additional 5 minutes, until cheese is melted.

Remove from grill, transfer pizza to a cutting board, and slice into desired size/shape. (We cut ours into little squares.)

Savor the flavors in the great outdoors!

*To sprout the flours, start with 1 1/2 cups each of whole spelt and kamut grain kernels. Soak them overnight in enough water to cover and place a light kitchen towel over the top of bowl. Drain in the morning. Put the grain back into the bowl with no water, cover the bowl with the towel, and let rest on the counter for 1-2 days, rinsing the grain 2-3 times per day in water, until tiny "tails" appear on the grain. Then place the grain on Teflex sheets in the dehydrator and dry for about 8-12 hours. Take the dried, sprouted grain and grind into flour using a Vitamix dry blade or flour mill. Or you can skip all of this and just buy flour that is already sprouted!
at 12:25 PM