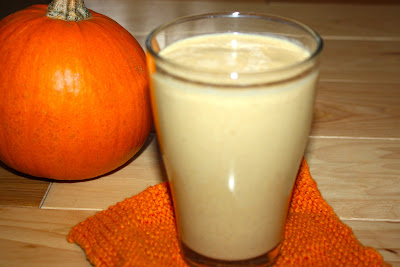 I call this recipe a dessert smoothie because that's exactly what it tastes like to me... dessert. Though not overly sweet, it has that hit-just-the-right-spot quality that makes it seem more luscious than just your average snack.

I make it thinner like a smoothie rather than thicker like a pudding because I prefer it to be drinkable. However, it you would rather eat it with a spoon, simply omit the water in this recipe and serve it in mugs with dollops of freshly whipped cream and sprinkles of cinnamon on top. (Maybe, just maybe, this will become your new favorite Thanksgiving dessert! Say goodbye to sugar-laden, calorie-laden, grain-laden pies for this light, refreshing take on the good ole' pumpkin pie!)

Place all ingredients in a Vitamix and blend until creamy consistency.

Pour into glasses and drink as is for a refreshing smoothie. Or for a thicker dessert option, omit the water from the recipe and pour into small mugs, then top with whipped cream and cinnamon.
at 6:07 PM