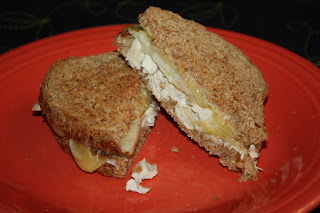 **Update: this post was published before my lab tests confirmed my gluten sensitivity, so if you are strictly gluten free like me, I recommend using my hearty, seedy bread in place of the sprouted grain bread in this recipe.**

It's not a Reuben... it's not a Rachel... it's a Ra-Kel! Okay, a little cheesy on the name, but you have to admit, creative? (Actually, I can't take the credit, my husband is the one who thought of the name.) Anyway, a wonderful sandwich recipe, name or no name.

Tuesday night has officially become "sandwich night" at our house. It all started a few months ago when I went back to my day job after my maternity leave with my second child. I'm in the office all day on Tuesdays and Thursdays, so if nothing more than that, these are long days, but Tuesdays are even longer because I also teach yoga that night. So from the time I get home from work and picking my boys up from daycare, I have only one hour in which to change diapers, feed my baby, play with my three year old, and make dinner. Needless to say, I need a quick dinner option. Bingo! Sandwiches to the rescue.

A few years ago when I gave up grains entirely, we pretty much did without sandwiches or anything with bread for that matter. Since that time however, I have discovered that I can eat sprouted bread every once in a while with no real catastrophic side effects to my body. So our once a week sandwich tradition works out just fine.

As a side note-- I can't recommend it enough-- if you must consume grains-- please soak or sprout them! This is such an important step in enhancing the digestibility and maximizing the nutrient content in them. Katie at All About Fasting has a great article on this. Did you know that before the industrial revolution, nearly all grains were soaked, sprouted, and/or fermented naturally before being processed? Meaning that everyone who ate grains back then already had the work done for them?! And now not only are most grains (or grain products) that are sold in grocery stores not soaked, sprouted, or fermented, but they are actually stripped of all nutritional value-- and even bleached so they look "cleaner"! (Don't be fooled by Big Food advertising that they are better for you because they add a bunch of stuff, like vitamins and minerals... because there are also tons of added preservatives, and colors, and dyes, and trans fats... trust me, they are not better for you.) Also check out Sally Fallon's must-read book, Nourishing Traditions, for more information on this topic and the importance of traditional food and it's relationship to healthy humans.

Ok, 'nough said on that for now... let's get to that recipe!

Spread mayo and mustard evenly on one side of all slices of bread. Top two slices of bread with chicken, pear, and cheese. Put remaining slices on top of chicken mixture. Place sandwiches on a heated non-stick griddle pan and grill for 5-8 minutes per side until toasted (if not non-stick, butter the outside of sandwiches before placing in pan). Slice each sandwich in half and serve.