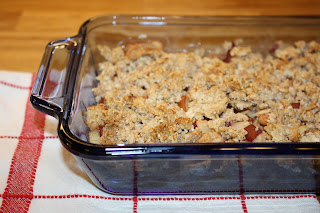 Now that it's September, I decided to indulge my oven craving and bake something. I haven't been able to do this in about three months, since before the summer began. It was a relatively cool weekend (compared to the 90 plus temps we had had the week before) and I just wanted to make something that would warm my core. I had a bowl full of organic apples on my table (my first apples of the season!) that were calling to me to be baked in an apple crisp (I mean, really, they were saying, "Kelly, roast me!"), so I did just that.

I used gluten free oats that had been soaked for 24 hours in water and a little lemon juice and then dehydrated for 10 hours as my topping base (they had been sitting in my pantry in an airtight container for a month or so). If you do not want to spend the time soaking and dehydrating your oats, then unsoaked oats will also work just fine in this recipe, you just won't get the added digestion benefits that you get from the soaking process (see Sally Fallon's Nourishing Traditions for more on this topic). If you are gluten intolerant, allergic, or sensitive, please make sure that you get certified gluten free oats, as oats are one of those grains that can get easily contaminated with gluten (as they are often processed in plants that also process gluten).

My family was in town over the weekend visiting, so they got to taste test this one. My sister in law, my  husband, and I all really liked it, but my brother in law, well, he's a hard one to convince (I call it "healthy," he calls it... "cardboard." But I give him kudos anyway because he ate it and when he finished, he said that it was, "not that bad." I think he just needs some time to come around.). Well, I'm gonna post it anyway because with three against one, I figure my odds for a successful blog post about it are stacked in my favor.

I think the best part about this recipe is that it makes your whole house smell deliciously, cinnamonny (there I go making up words again) fragrant. And who doesn't like a cinnamonny-smelling house?

Preheat the oven to 350 degrees.

Combine first four ingredients in a bowl and toss to coat. Pour into an 8x8 inch baking dish. Add the crumble topping to a bowl and toss to coat using a spatula or wooden spoon, until it resembles course crumbs (feel free to use your hands too to get the oats broken up and absorb some of the oil). Spread the crumble topping over the apple mixture in the pan.

Bake for 40-45 minutes. Best enjoyed fresh out of the oven. If you do dairy, it would be awesome topped with fresh (real) whipped cream.